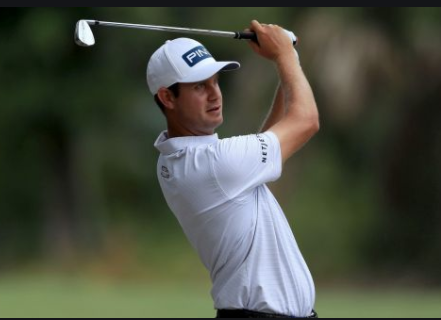 Harris English is showing a progressive form rating of a maximum 10.0 on the scale ahead of the BMW Championship

The BMW championship sees 70 players moving onto Olympia Fields while the UK swing comes to a close on the European Tour with the ISPS Handa UK Championship.

Note: Weekly Odds Charts inc BMW with top 20 vs the field rankings are available here on my Patreon Platform (click)

Raw Power is the theme at the BMW Championship. Olympia Fields is referred to as a brutish track which plays around 7,366 yards to a par of 70. Its been used for the 2003 US Open which actually saw a leaderboard infested with fiddly players, but then it seems like they were all using hickory sticks and ping pong balls back in the day. It hosted the Womens PGA in 2017 won by Danielle Kang, and notably the US Amateur in 2015 won by one Bryson De Chambeau. Noted he wasn't as long back then but he is a fav of mine this week, along with value fancies in the form of Matthew Wolff and Cameron Champ.

Coincidentally (perhaps) both Cameron Champ 80/1 EW and Matthew Wolff 50/1 EW have won a college event at Olympia Fields and those two and Bryson are arguably the longest trio in the game right now. Elite bombers is the theme here, and ball striking.

Talking about ball striking, one of the form men on the PGA Tour right now is Harris English 40/1 (6 places), and guess what: Harris also has history here at Olympia Fields. More to the point though and English ranked 4th tee to green at TPC Boston, and 3rd around the green en route to a runner up finish. He is 6th in Strokes gained total for the season which incorporates a much improved ranking of 16th in the putting department. Crucially he hits that magic progressive form rating of 10.0

Here are Harris English's ratings, and underneath at the bottom you'll see his player profile from my

Tony Finau also has the power to be up with these boys if he decides to unleash. He has been doing more of it off the tips recently and Olympia Fields may be the perfect track to trust the process. At 40/1 EW he's an auto onside bet in the type of test he loves on elite field tough courses.

Please note: all weekly Euro/PGA tour tips, advice and sub market plays are available through my

members mailing list (click link to join)
I find myself intrigued with the UK Championship market and market leader Rasmus hHojgaard in at 16s. I had him at around 50s on my early tissue which was an error aswell, now i looked closer at his form. Somewhere in the middle around 28-33 would be a truer reflection of his fair price IMO in what is a tougher European Tour field than in recent weeks. I was thinking what happened maybe had a little to do with an illformed and late Betfair market. 1 book then quoted 16s. Some others followed suit. Very strange price, for me and the market in general looks a little off, but maybe that is just a reflection of gauging accurate probabilities in different/strange times. I'd fully expect Pieters/Westwood to lead this ISPS Handa UK championship market and in terms of winning chances they are probably the two to beat. (update): Thomas Pieters now a WD after all that

Matt Wallace wasn't as big as I'd have expected either. He came in at around 18s. Wallace is an ambassador now for the Belfry and has been there for a week or so. Still a bet at 18s IMO if you can get the extra places. Wallace has shown signs of a return to form over in the US with a high finish at Muirfield Village the standout performance. On a likely birdie fest on home soil he's a probable contender

Haotong Li 20/1 EW is the other standout at the top of the market. The Brabazon course at the Belfry is another run of the mill UK style mid length (par 72 7,233 yards) parklands track where we'd expect lots of red numbers. It's hosted a umber of Ryder Cups but I don't really have much recollection of it. Water features bring in a risk reward aspect. Haotong fits the bill , showing progressive form having led the PGA Championship and challenged in Wales firing par breakers in streaks.

All my weekly selections and ratings are bred using my

Course fit and player profiling manual Ebook which you can check out in detail or buy through the link... Player and course profiles in the eBook also supply data you can use to plug into my interactive course fit ratings model at the bottom of this website 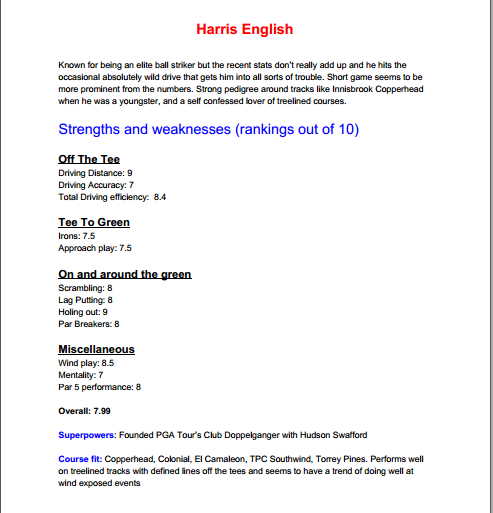