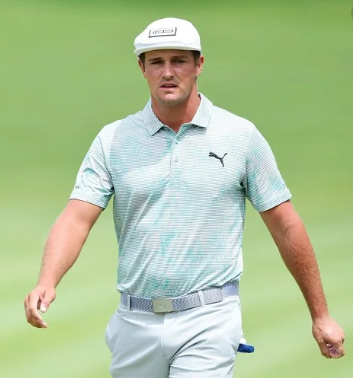 Bryson DeChambeau 8/1 EW
"Bryson has put on 30 pounds in a quest to add extra length to his game and become a force in the majors"
First thing's first and the above quotes and title are unchanged from the draft of my Masters preview that was ready to be published back in April. The only thing that has changed is Bryson's price as everyone cottoned on to what he was up to, which he has now shown. In my opinion the changes Bryson is making were always with one eye on Augusta - the track that is absolutely perfect for his long game and what he is doing with it. I've backed Bryson for The Masters in the last few seasons and that was largely due to course fit (current model rating 9.0). This was before he even started the transformation in his game. He went off around 33/1 ew last year, and hitting 50.00 on the machine.
Form figures for Bryson in his three Augusta appearances are deceptive, reading 21-38-29, but he co-led after day 1 last year and back in 2016 as an amateur he was just 1 shot off the lead at the end of round 2 before a triple on 18. His added length and the new slot in the calendar - meaning the course will play longer - are even more in his favour, and his preferred shot shape is the little right to left draw.
Bryson is extremely efficient with the long irons, with high approaches, and holing out from the 5-15 foot range. In fact he ranked 1st in putting from 10' and in on the PGA Tour in 2020. He loses a point in his course fit rating for chipping/pitching/lag putting but he may not need to do too much of that if those irons are on point. It's possible he will be using an even longer driver for this year's Masters. In short, this could be a shit or champagne (in the words of Nic colsaerts) Masters for Bryson and I'll be backing him on the handicap in the hope it's the latter.
"I’m excited. I can’t wait, honestly. It’s a golf course that suits my game really well " - Bryson on Augusta

The November Slot - Elite Bombers Only
If you haven't noticed, the Masters 2020 will be played in an unfamiliar slot on the Calendar. It will be played "behind closed doors" with no fans this year which adds another random element to proceedings. If you look at The Masters scoring down the years it varies quite a bit. There's no rough to speak of at Augusta so the scoring disparities are down to the wind strength and how fast and firm the course is playing. In my 2019 preview of the Masters for Unibet I talk about the impact of varying conditions on Masters scoring at Augusta. I think we could see something similar to the 2015 edition this year with "already long fairways playing longer" but approaches easier in a softer set up. I have a vivid memory of Justin Rose and Jordan Spieth getting away from the field that year and at one time I couldn't see either making bogey, it seemed so easy. Augusta is equipped with sub air systems so green speeds will still be somewhat to the hierarchy's tastes - probably 13' on the number.
US Masters target player proflie:
At Augusta We are always looking for a dynamic player with prodigious length off the tee, a strong mentality and good proximity with the irons. A right to left shot shape is an advantage, and the ability to come in high with approaches. Players strong in holing out from 5-15 feet should prevail. Par 5 performance usually proves key when looking at the best fit for who will win the Masters.
In short: BRYSON DeChambeau
The course - Augusta National, par 72 7,475 yards
Key features:
Generous landing areas between a strong treeline laden with pinestraw. No rough to speak of, either along fairways or around the surfaces. Large multi-tiered undulating bentgrass greens, usually playing over 13' on the stimp.  Conditions will be softer and a little slower this year and the course will play brutally long.
Amen corner - a tough trio of holes around the turn that can make or break a round
Par 5s that will dictate the scoring as always
No patrons
Premium on: 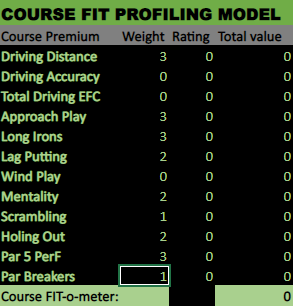 The above is a screenshot of my course fit profiling model (click the image to go to the interactive model and play around with the inputs) showing the weightings and premiums at Augusta. All player attribute data and ratings are available in my Course fit & player profiling manual

Masters Key Metric leaders (2020)
Par 5 birdie or better
Justin Thomas
Xander Schauffele
Jon Rahm
Bryson deChambeau
Justin rose
Rory McIlroy
Patrick Cantlay
Driving Distance
Bryson DeChambeau
Cameron champ
Rory McIlroy
Jason Kokrak
Matthew Wolff
Dustin Johnson
Bubba Watson
Strokes Gained approach
Justin Thomas
Collin Morikawa
Russell Henley
Tyrell Hatton
Hideki Matsuyama
Webb Simpson
Rory McIlroy 12/1 EW
I'll probably say this only once in my life and there will never be a better chance for Rory McIlroy to grab the major grandslam. Most of Rory's big victories have come on long soft usually treelined lay outs. Rory tops the course fit numbers for Augusta alongside Justin Thomas at a rating of 9.55, only Rory owns the draw as opposed to Justin's fade - big advantage at Augusta. It's the green speeds that usually get  him at the Masters but the November slot will have them running slower despite sub air systems. They will also be softer so he can fire more aggressively at the pins as he likes to do.
"November is going to be different, very cold, the course could play very long. it plays long already but it can play very long. the greens may not be as fast in April depending on the moisture", "It's going to be a different Masters this year, but purposely, maybe selfishly, that's what I need to get the jacket"
Add to this the no fans element in the 2020 Masters. Rory spoke specifically about this the other week when asked and talked about quite liking the lack of "noise" surrounding his upcoming Masters trip this year. He wasn't talking about the no fans in general where he says he struggles for intensity.
"I always feel there's this bit of anticipation going into Augusta, there's all this hype"
McIlroy is also finding form at the right time circling a record (for him) 29 birdies at the Zozo Championship. He features highly in 2 of the 3 key metrics above. If it doesn't work out he can go home to his new family without a care but, Like Bryson, if it all comes together it's possible he could blitz the field - it wouldn't be the first time.
PATRICK CANTLAY  25/1 EW
Patrick Cantlay is my headline tip in my Masters antepost preview and is peaking at exactly the right time. Cantlay has just come off a win in the Zozo championship where he took on John Rahm and JT like they were ordinary players. He didn't make a bogey until his 62nd hole and only made two all event - one of which he said he got his number wrong.
Here's what I wrote about him at the end of last year:
"The outlier is Patrick Cantlay at 30/1 approximately. I absolutely love Cantlay's course fit profile for Augusta (9.4).  Cantlay has all the best attributes required to win The Masters, from the  power draw off the tee to the strong competitive mental attitude and streaky putting. He ranked 21st in driving distance in 2019 on the PGA tour but was higher than that for much of the year. He was 14th in putting from 10-15 feet - a vital stat at Augusta. Cantlay recorded a top 10 at the 2019 Masters and is tipped to go well in 2020."
He shot a 3rd round 64 at Augusta. 64. SIXTY FOUR.
I think Patrick Cantlay thrives and belongs in contention in the big events and at 25s+ is some of the best betting value of the golf betting season season. He is 2nd in overall ability rating in my profiling manual by the way.
The dark horse

Another interesting prospect this year is big Jason Kokrak at 125/1 EW.  Always an underrated golfer and one of the biggest hitters in the game ranking 4th in driving distance in 2020 as you can see in the key metrics above. Kokrak plays with a big booming draw from the tips and is one of the best iron players around. It's been the greens he has struggled with in the past aswell as being labelled in the bottler category. I think the choker brigade are all 25 handicappers to be honest but if Jason does struggle with the nerves in contention he'll be another (of an emerging theme) to benefit from no fans being around, and indeed maybe this was a key driver in his recent field demolishing at Shadow Creek. In saying that he also led the strokes gained putting statistic (aswell as GIR) enroute to his win in the CJ Cup on the track he knew well. The big fella is only 35 and it wouldn't surprise me to see him feature at a price at the 2020 Masters

Below is a screenshot link (click to view) to my top 20 vs the field Masters ratings and fair odds to 100%. You can calculate all course fit numbers using the data in my profiling manual

US Masters Top 20 vs the field ratings

THE MASTERS  Tips Summary :
*Join my 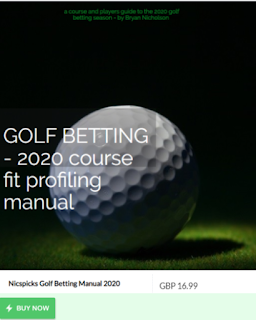 Nicspicks Ebook - click image for details
My player profiling and course fit manual above supplies all the data for the top players across the European and PGA Tours. It lists all the metrics and weightings for the various courses. Using this data you can plug the numbers into the interactive model above and get an accurate course fit rating for whatever player on whatever course