The first of the play off events gets underway from one of the most scenic venues in golf: a view out on New York harbour and the Statue of Liberty. Liberty National GC is described as a parkland-links style layout off the bay. It's in pristine condition. The wind can get up here and member Philly Mick who is playing a money game there today (Tue) said previously:

"The hard holes here are ridiculously hard, and the easy holes are pretty easy," "And because of that, we are going to see lots of birdies and bogeys, which is exactly what happened in my round." - Phil Mickelson

So, key word: volatile, one for the inplay traders perhaps?

We had Patrick Reed here 2 years ago and following him closely it was the first time I've seen him discard his stock draw from the tee to get to grips with some of the shot shapes from the markers. He played with predominantly a fade and he did it with aplomb. Not a plum, no plums here, just golf balls, and Patrick Reed balls. Of course Johnny Rambo was the man who missed out and he also owns the big left to right shot. Coincidence maybe. Or maybe not.

So a ball striking tee to green expert who likes to play a fade? MR. Laser irons himself Collin Morikawa anyone? Yes please, and why not throw in a side of Viktor Hovland while we are at it. Both players are possibly slightly bigger than they might have been after lacklustre run-outs at the Fedex ST. Jude. That was obviously off the back of their Olympic exploits, but they should be refreshed and ready to go again now.... 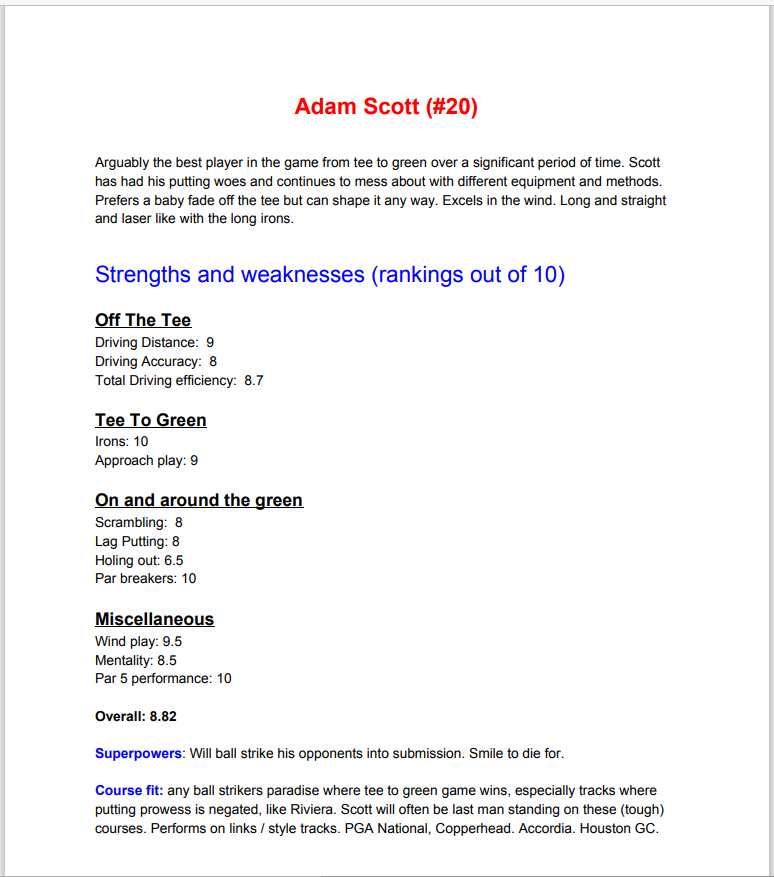 This is Adam Scott's profile from my course fit profiling manual, where he was ranked no.20 at the start of the year. If you haven't got the manual yet you're potentially missing out on winners such as Martin Laird 200/1 and Cameron Champ 125/1, so do yourself a favour.... click the image for manual page

Scotty is a former winner here at Liberty National GC as he said last week at Wyndham where he was bullish of his chances of winning both events! He could and perhaps should have notched the 'W' at Sedgefield, missing a 4 footer in a playoff which would have banked him the beans. It's no coincidence Scot has hit the win and top 5 in the two strokeplay events staged at Liberty National where he owns 7 out of 8 rounds in the 60s, including a closing 65 last time out 2 years ago. He edged out Tiger Eldric Woods amongst others in 2013. As mentioned, It's a ball strikers' track where those adept in the wind and who can play a low fade have an edge. Tee to green will be key and that's where Adam scott thrives, ala Riviera

I talk in my Angles and Edges book (below) about the fact that in this day and age it's not necessarily a bad strategy to auto-play some of the elite when they slip past a certain price threshold (with extra places) as it can be a little bit random from week to week who turns up on the leaderboards, especially in these stacked events. As Padraig Harrington says (also a chapter in my book) the guys whose drivers are firing on the week will be the ones contending. This is Tony Finau right here, right now. Hideki did it at the Masters (50.00 on the machine), Morikawa did it at the Open Championship (42.00 on the machine). Bentgrass greens should give Finau some respite with his putting woes and he owns that stock fade shot we are looking for, and he obv excels with the iron game, especially long irons which we are targeting here. I can't leave my man Big Tony out at this price.


New: "ANGLES & EDGES"  covers everything in 15 years of golf betting & beating the markets - just click images or links for info and details.

If you enjoyed the preview and would like to see more of my content, have a look at my golf betting book and my course fit profiling manual below. All support in terms of sales, reviews, tweets etc is greatly appreciated.