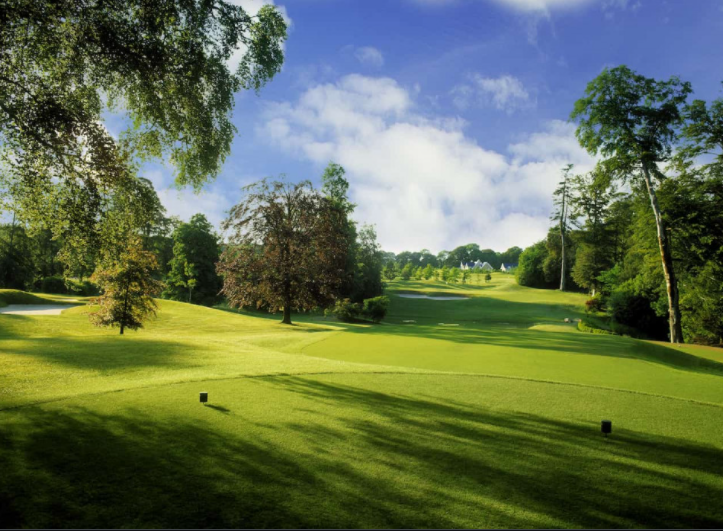 Follow @NicsPicks Martin Kaymer can continue his great form at Mount Juliet
Who loves a parklands? Martin Kaymer 20/1 loves a parklands, especially one that places a premium on tee to green profiency and the mid irons. One designed by the fader that was Jack Nicklaus to boot. Mount Juliet has previously been voted the top parklands course in Ireland and it's a fantastic venue for the Irish Open. It will play very similarly to Munich Eichenried last Sunday so pay close attention to the BMW International leaderboard and expect those showing good form in Germany to continue their progress in Kilkenny.

We will see graded rough along the fairways but very fair and I can tell you in Ireland barring outlier weather conditions the morning players should recieve a full stroke advantage on this layout. Softer smoother greens and 10 mph less of wind are the ingredients around this island. 1pm on the dot the wind comes in 6 out of 7 days a week. (dislaimer: this isn't *always* the case). 5 lakes feature throughout with strategically placed bunkering and large greenside sand pits. Keep scrolling for my Irish Open rankings and estimated fair odds.....

"I think the golf course is absolutely gorgeous, the fairways are perfect, the greens are the best greens we've putted on all year, including the majors. these things are absolutely pure" - Tiger 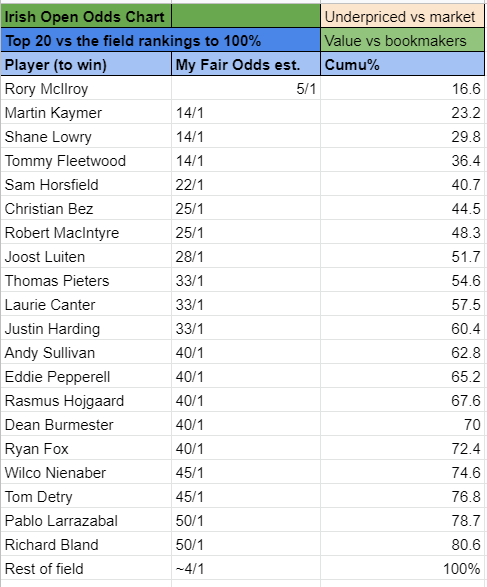 As you can see I give a high chance of around 60% that the Irish Open winner will come from the top 10 this week. In fact I make Rory McIlroy almost as likely as the field (field = outside the top 20) - who would you rather have onside?

You'll notice Justin Harding 55/1 and Pablo Larrazabal 80/1 are two guys I make big value vs the market prices. Both are solid ball strikers who play their best stuff on this type of parklands layout. Pablo is a 2 time winner at last week's Munich Eichenried venue and both featured in Germany. Larrazabal owns wins at Le Golf National and has a solid record at the likes of Valderrama. His progressive form lines correlate nicely with Harris English who just won the Travelers Championship showing similar in the run up - this is the type of form trend we look for. Justin has shown us some strong wind pedigree and this will stand him in good stead if it does get blowy, which is often the case over here.

Joost Luiten 50/1 is another who excels on this type of track and tee to green is his bread and putter. Joost gets penalised for chipping especially off tight lies and there probably wont be too much of that at Mount Juliet. He's been simmering a bit of late without really getting into contention but this is his type of test and I have him aroudn half his general market price.

I can say similar about the likes of big hitting Wilco Nienaber and Laurie Canter. Nienaber came in at triple figures in some places. He was the longest in the field at the US Open at Torrey Pines but lost alot of strokes putting. Wilco needs to tone it down a bit but he's gathering a lot of experience. He showed us he can compete at the treelined parkland tracks at Randpark when he pushed Joachim Hansen all the way and he also won the Dimension Data this year which was mainly played over the Montagu parkland course. If he can keep it relatively straight off the tee at Mount Juliet he could feature.

Laurie Canter 50/1 was onside for the European Open at the Lengthy Green Eagle. He was derailed by a 9 on the par 5 18th in his first round. The spinach was very much up here so the long hitting didnt have quite the benefit I thought it might. I want to keep Laurie on the list at a price I think is too big.

Rasmus Hojgaard 60/1 is in a similar vein and he won at the Belfy (Brabazon) last year which is another decent parklands guide to how the play might go at Mount Juliet. Rasmus is showing some progressive form culminating in a top 20 last week. He's been priced significantly shorter in similar fields before which shows the fickleness of golf markets and this kid has serious potential.