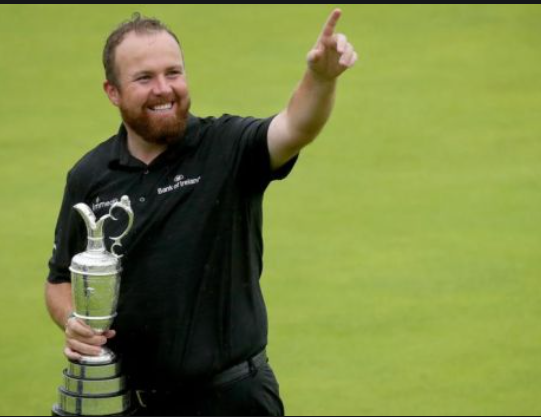 Follow @NicsPicks We got him right at the Open Championship in 2019 for one of the better betting weeks I can remember. Plenty of us were on and Shane was back celebrating with us in our Dublin locals that very weekend, trophy in hand. That was no coincidence, that was what we call in the punter world: course and event fit. If there's a more links like test in the US than the Ocean Course at Kiawah Island I'd like to see it. That's where we go for the 2021 PGA CHAMPIONSHIP and that's where "Shano" excels. Progressive form is the other highly important variable when sizing up a golf bet and here's a tweet I made about Lowry in mid April re the PGA Championship:

Going to put this bet up here now. Shane Lowry is progressing into form nicely. He is 80/90 ew for the PGA champs right now. Kiawah Island is as links style as they come where total driving efficiency and short game prevail. Highly wind affected.

Lowry has been talking about how is game is shaping up nicely ahead of the PGA championship in late May. He has been on the cusp of contention in some big events in recent weeks and his game is progressing well and could be set to peak for the 2nd major of the year. Shane's weakness has always been his putting from around the 5-10 foot range and he has now started to fiddle around with putters and putting technique which is what's holding him back from high consistent finishes vs actually challenging strongly for the win.
The PGA championship test that Kiawah Island brings though focuses more on tee to green and around the green aspects of the game. Lowry's an eye catching antepost price and still available at 66/1 (6) + as I write in the PGA championship betting market. He's well rested now after a few weeks off and got rid of some rust with 4 rounds at Quail Hollow. My PGA Championship odds chart and rankings/ratings will be posted here closer the tee off (now below)...
PGA CHAMPIONSHIP 2021 ODDS CHART 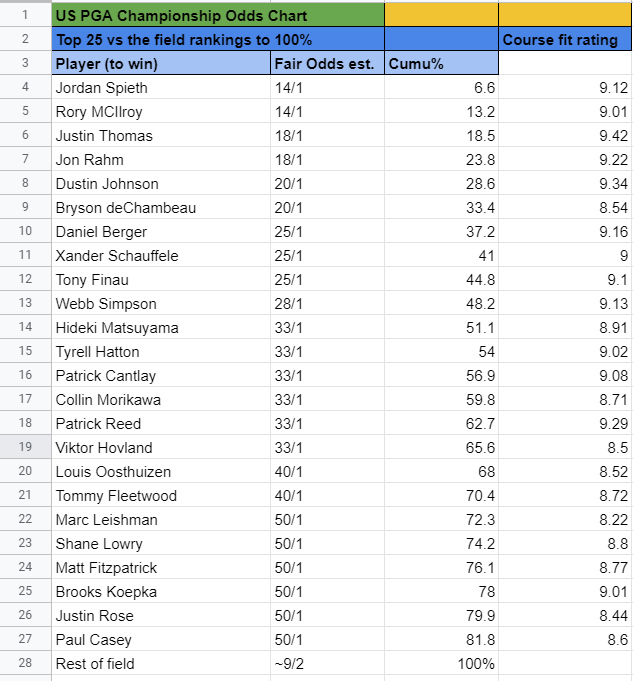 Below are the course premiums and key metric weightings for Kiawah Island. The model screenshot shows Shane Lowry's course fit rating of 8.8. Click the model image to use the interactive version. All weekly data is supplied in my 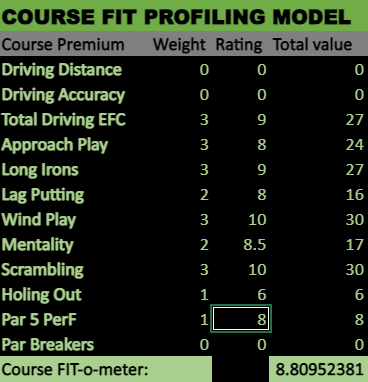 If we look back at the PGA championship leaderboard from the 2012 renewal at Kiawah Island there's a fairly obvious theme: 7 of the top 10 and 5 of the top 6 were Europeans. 4 of those 5 were from Britain and Ireland, and with a lot of links experience.
Rory McIlroy blitzed the field and Ian Poulter and Justin Rose were two of the players behind. Carl Pettersson from Sweden was the 1st round leader and I remember Joost Luiten flew out of the blocks and was -8 through around 14 holes only to drop 4 shots coming in - mainly down to short game trouble. Round 2 was very wind affected and scoring was high, so you can get a picture now of what's required and how play will be dictated.

The Ocean Course at Kiawah I mentioned is basically a links, that can stretch up to nearly 7,900 yards par 72. 10 of it's holes run along the coast and rather than being built in behind the dunes it was raised up so the vistas were more prominent. This means the wind will affect proceedings even more. To combat this the fairways were made quite generous. Strong driving is a pre-requisite but the test is very much on approach and play around pretty large greens with massive run offs. You need not apply if you are not a strong wind player.

My angle this week is sticking to strong wind and links players, mainly from Britain and Ireland and you'll note my odds chart and 100% market gives a strong bias towards these guys.
Matt Fitzpatrick 50/1 ew isn't the longest but he gets it out there under the wind with a bit of run. He excels in the iron and short game departments. Tyrell Hatton 50/1 ew has a similar game, plays predominantly with a fade off the tee and is excellent around the greens and with the flat stick. Hatton has strong links pedigree and has won on the links of ST. Andrews.

I'll take a chance on Tommy Fleetwood 50/1 ew.. Tommy is another links specialist and he was last year's PGA championship headline pick. Similar trend going in here for Tommy in 2021 where he hasn't played a lot of golf but has been simmering when he's teed it up. Fleetwood was on the fringes of contention at the Wells Fargo and has the ideal profile for Kiawah's Ocean Course. He went head to head with our main man Lowry when Shano won at Royal Portrush and a re-run is not totally out of the question at the 2021 PGA Championship.

I don't think there's a better suited player to Kiawah Island than Marc Leishman 66/1 ew who is fresh off the back of a top 5 in the Masters and currently playing nicely in Texas as I write. Leish is simmering nicely and is a big game player who has a sneaky good record in the majors. He lost out in a playoff in the 2015 Open Championship. I expect this week to play out like an Open championship and wouldn't be surprised to see Marc holding the trophy. Leish shot 72 here in 2012 in the gale force winds day 2 - only 4 scores returned were better, so the windier maybe the better for the Aussie.

Louis Oosthuizen 60/1 ew is another showing progressive form with a t26 then 8th place finish at Valspar. Of course Louis is an Open Championship winner and also playoff loser. He own's multiple 2nd place finishes in the majors and this is his kind of test. He shot 3 rounds of 70 or below here in 2012 for a t21 (2nd round 79 in gale)
Alexander Noren actually placed in the first round leader market here back in the 2012 PGA championship just 1 shot shy of 1st place after 18 holes. We will see a three fig price in the FRL market again. The whole field more or less were blown away in round 2 so Noren didn't feature after that. He has had a few top 25s in a row and is showing strong progressive form trends. As I write he is challenging strongly in the Byron Nelson. Noren has significant wind pedigree via his ball striking skills. He is one of the best scramblers from this side of the pond. 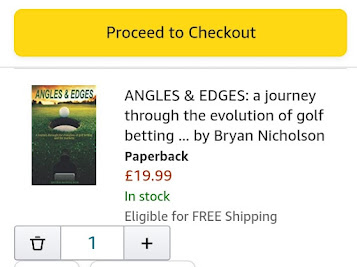 Please note: all weekly Euro/PGA tour tips, advice and sub market plays are available through my

Note: All weekly course fit numbers can be computed using my course fit profiling manual below. All my weekly selections and ratings are bred using my