It's been a tough stretch for me post (or during) Covid, straight up. Having been immersed in this game and these markets seriously over the last 14 or so years, it's easier for me to appreciate any tangents from what is normal. January's are always a time where I take a bit of a back seat and watching brief, playing it carefully while players find form after the Christmas break. I've always found results in January's are a lot more random than the usual and if I could get any winners I took it as a bonus and a present from variance.

Basically what I'm experiencing now is a longer and more potent January.

What's been happening in the golf betting world is the strength and depth of the fields are getting larger and larger and the quality gap narrower and narrower. There's less than 1 stroke per round between the top guys each week down to the guys towards the middle of the market. Each way and place returns are hard to come by given 2 shots often equates to 10 or 15 spots on the leaderboard now compared to 5 shots in the past. Winners are obv a lot more rare than 5-10 years ago unless, to be blunt, you are going through an unsustainable purple patch. The fact is the pre tournament odds by default are a lot fairer a reflection of the actual true probabilities than they used to be. This is not down to skilled algorithms or hypnotic data models or anything, it is simply down to the changing of the game and the massive strength in depth of the fields as golf booms in popularity amongst the younger generations.

To try and combat this I've been turning more and more towards in play betting and markets that can narrow down the field. They way golf works is that the guys that occupy the higher spots on the leaderboard after day 1 are generally the guys that fight it out for the week. It used to be quite easy for me to find these guys pre event. Now it's an awful lot tougher and honestly due to covid I'm finding it so strange and random for whatever reasons: lack of competitive edge and practising, intensity and motivation, big numbers due to stray balls / no fans, throwing in the towell after a bad hole or 2 etc (all variables that are coming to light also from the players themselves now).

The main battle will always be with variance though.

I compile my own tissues generally on Sundays and the market has been creeping gradually closer and closer to my true (100%) probabilities over the last few years. The plan for the forseeable is to be a little more selective, both with tournaments and with players I back before the off.

As always there are players that jump off the page when I look at the odds, and I like a few for Wyndham and the Celtic Classic:

The Twenty 10 course at Celtic Manor was one of my favourites on the European Tour for a number of years. It's a linksy style exposed undulating track with wispy fescues for the overly errant or big numbers awaiting if you visit lakes and ponds. It is a risk reward theme very aesthetically similar and also playability wise to le golf national albeit emphasis is on distance over accuracy here. Greens are dome shaped with run offs and there's a massive premium on mid iron play, similar to Wentworth aswell in this respect.

I was on Nico colsarts last week in play and at a price of around 50/1 in this field he was an obvious back. Nico won on the le golf national track in France last year and he has pedigree on this type of test in the likes of Mauritius - a wide open wind swept track with large undulating greens

I am also on Callum shinkwin, Romain Wattel and Jamie Donaldson ew (various markets) at an average of over 100/1. All three showed form last week and have links or course form. Shinkwin loves a links style track and this type of test is where he has a number of his better results. I put up a snippet on twitter yesterday of my preview for the Wales open in 2014 (last time we were here) where Donaldson led the market at 13.00 and Wattel was a bet at 31.00 given his affinity for the track (and form then). Enough said. Wattel almost won here 1 year but iirc carded a snowman at the risk reward 18th

At Sedgefield for the Wyndham the guys almost pick themselves year in year out. For me it used to be David Toms, Carl P, John Rollins and Brandt Snedeker etc. Sneds deffo one to look at given current prices of about 4x what we usually see on him here. Now the likes of Ryan Moore 40/1 features heavily in my course / event notes through the years. Massive premium on Iron play aswell here and this is where Moore excels. He knows how to play this course.

Kevin Kisner and Si Woo Kim fall under much the same bracket at similar prices of around 40s. Both are showing strong progressive current form trends. As is Denny McCarthy who has a high course fit rating and was playing well in the PGA last week, finishing by hitting a similar shot to what Morikawa did at 16 to set up an eagle. If he can get his putter going as he often does he could be a live 3 fig runner. 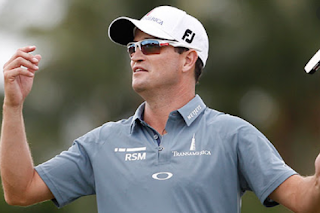 A late addition to the party was Zach Johnson who is at such ridiculous quotes at around 150/1 ew that I almost missed him. Check out his course fit rating for Sedgefield below. Zach was actually t3 after round 1 in last week's PGA Champs before missing the cut. He has been simmering post covid break and looks serious value here at a track he doesn't visit too regularly, but maybe he should with that course fit rating 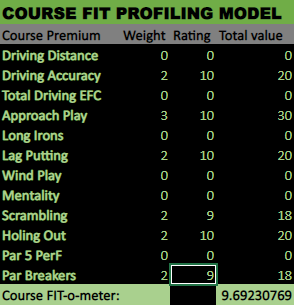 Please note: all weekly Euro/PGA tour tips, advice and sub market plays are available through the