Update: The Italian Open trade (scroll down below) went OK with Kitayama shooting low. The others pretty much shot themselves out of it but we still returned circa 100% profit. I posted an updated screenshot on my Twitter.

I have a potential day 4 dutch / trade for the Houston Open. Members of the Nicspicks premium mailing list have a decent 50/1 antepost chance of a winner with outright ew selections Beau Hossler and Cameron Tringale out in the penultimate pairing at -9. I make it around 30% likely that 1 of those two comes through but in case they don't..... 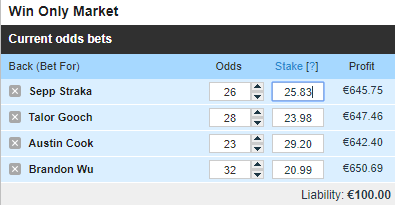 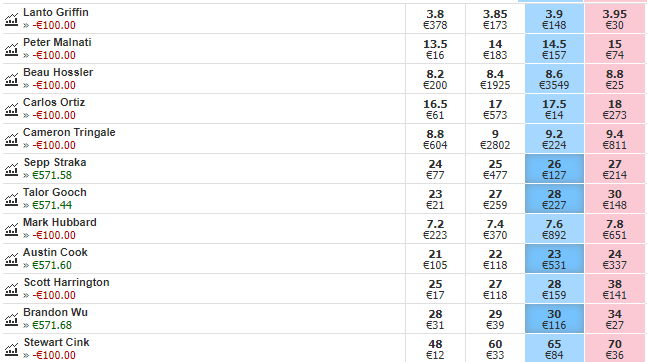 (screenshot points directly to Houston market on desktop only)

The options here are to let the value play ride and look to 1 of the 4 guys to come through, or you can look to trade should one of them reach around the evens mark later, which would guarantee a nice profit

I was playing around with some small bets at big prices pre day 2 of the Italian Open golf, and the current Betfair trading book looks like this after doing the same for pre day 3 trading. Given the presence of Matt Fitzpatrick - who is very much underpriced - and also Justin Rose in the rear-view mirror, there is some great value and trading potential on good players that can shoot low on the -6 and -7 mark. All others are small negatives except Jordan Smith 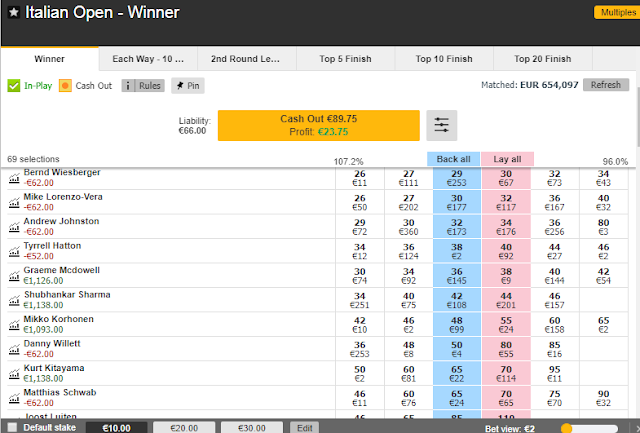 In short, these guys are close enough to make a big day 3 move, and potential big price jumps. We could see a whole different look to the market at the end of play on Saturday. The theory around this strategy is just skimming some value from the prices while backing enough players to reduce variance. At least 1 of those guys I have onside will usually go low, meaning it's at least money back. Should the top 2 stumble and a couple of my guys take over, that's where the profits come in. That Often happens in this type of scenario and scoring situation, and I love to oppose the last grouping on Saturday.

New players can get a Free £20 matched bet here which can be used on the Italian Open markets. You can learn more about the concept of trading here