So here's what I've been doing this week (apart from lying on my backside and becoming more and more deeply depressed with pub poker). First of all, as alluded to on Twitter, all of the up and coming Aus talent seemed to be out for the Perth International, less maybe Ryan Ruffels and Nathan Holman. Jarryd Felton - who actually grabbed a win off my radar at the NSW PGA Championship - got a start, as did Lucas Herbert....

Anyway I did my conkers backing them all in the sub markets. Todd Sinnott got me a few quid back in the FRL and could save my bacon if he bags a top 10 (currently T8 with 20 or so other guys!). Lucas and Jarryd were actually going well and I had a decent potential return on the former for top 20 at silly odds. He was actually in the top 20 after 5 holes of R2 but they both MC'd.

Anyway we have a bit of a monopoly up top there with Uihlein, Gibson and Scrivener all in the top 5. The other 2 - Louis and Rumford - were backed 3 times between them in last few weeks #prematuretipulation (again a pilfered phrase)

On to the early round #backtolay trading and I put up a nice 36 hole dutch / trade in Aus on Twitter of Bjerregaard, Uihlein and Morrison. I couldn't play it myself as I can't use the Aus wallet right now so I'm all about the EW. Anyway see below for how it looked after (to example £500 outlay) the state of play in R1 with 2 guys bombing and 1 guy leading. I suggested zeroing the book by covering all outlay as Uihlein was trading at 6.40.

On to Honda and I backed all my double figure selections (all 2 of them) but added Gmac, J-Walker, and serge after big drifts on the exchange. I also put some insurance which turned out not to be insurance on Scott and Grace.

Below is the antepost book and the state of play after R1 where I could have exited for almost 100% profit if I fancied. As alluded to on Twitter I didn't want to deviate from the set strategy, despite the unpredictabilty at Honda with the wind, and water everywhere. Hopefully it goes well (currently Jimmy and Garcia are tied for the lead at -5 with Fowler but Walker is in trouble at #10

Update: Here's the equalised Honda Classic book after 36 holes despite Lowry's capitulation (still have much bigger greens on Lowry, McDowell and Palmer should 1 go mad over the weekend) 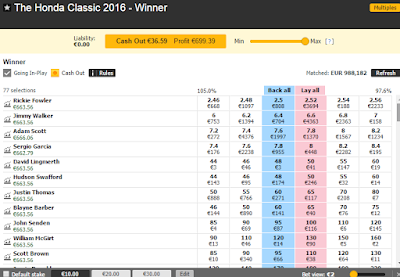 The Scott "Insurance" did afterall turn out to be nice insurance and keeping to the set strategy got me a 200% ROI rather than a double up.