Yes, so I mentioned on the mailing list Nicolas Fasth was a very long odds outsider to watch in the sub markets. He stood -5 with 2 to play (one a par 5) - a score which would have seen him get a share of the first round leader places while -6 would have seen a full place payout.......

He failed to birdie the par 5 and bogeyed his last to fall away at 250/300/1. Now, the stakes were only a tenner EW but it would have been nice. But I'm already over it - Given I'm one of the most negative people you'll ever meet, anything less than a bogey on the last for my guys in contention is a bonus.

I've now recouped 80% of my stake trading back Kaymer. I decided I don't like the way the leaderboard is looking and his late tee time so as mentioned on the Twitter yesterday, I placed some of that quan on little Matt Fitz who likes fairways (very penal rough here this week) and he didn't have a bogey yesterday. Matt has just posted -1 for a -5 total as I write so there will be somewhere around 50% loss on that too.

Andy Sullivan however has done the business early in round 2 with another 67 to lead at -10 currently. His price at the end of the day will be dependent on the big names coming out in the afternoon. Hopefully the wind will get up and none of them will go low and I can equalise my book for a nice green on Sully

I could slap Zach Johnson with a wet fish right now. I really did feel I was having an early round trade to nothing with this one so I added a ton to my Career Builder Challenge book on the Open champion. He bombed. Maybe he'll shoot -10 in R2 and I can get my stake back. Currently I have a load of players and darts in or around the -3/4 position which is 4 shots back. Now, I havn't yet seen the scoring averages but it seems the Stadium Course played the toughest and a lot of mine played that yesterday. Indeed it looks like only 4 from the SC broke the top 30 yesterday.

I mentioned I'd added a lot of big priced darts to the book as I always like to do here, and I wasn't lying, it's not in my nature: 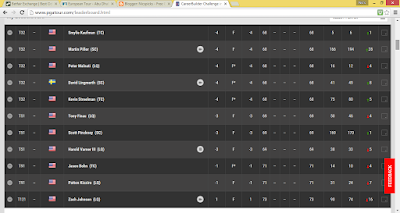 I would so like Martin Piller to break the top 20 this week. I mentioned he was priced between 5s and 28s for a top 20 across the books so in other words most were pretty clueless there on his chances. Harold Varner III, Finau and Lingmerth are the main trades so hopefully 1 or 2 of them can go low later to give me a decent trading position after round 2. Given the course rotation, I may let a decent bit ride if thigs go well today.

Back to Abu dhabi now and a Paratore top 20 would be nice so a low 1 this afternoon is needed. Morrison will start level while Bjerregaard, in hindsight regardless of score, doesn't look a great selection and is in danger of a MC.