Portugal Masters Betting - Time For Gavin Green To Step Up? 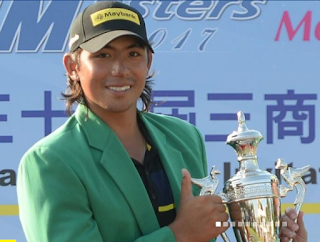 GAVIN GREEN mark II. It's GG sequel week and the reason I say that is I've been waiting for a long time to back the Malaysian
superstar-to-be - and current Asian Tour Order Of Merit title holder - on courses / setups like this one in Portugal. It proved a fruitful week for followers at Albatross Golf Resort in Gavin Green week 1 when we got him at 3 figs in a share of the 1st round lead and also in the outright ew market at ~150's and top 10 market, when he tied for 3rd. Green also has a runner up finish under his belt on the main tour. He can eat these resort type layout courses for breakfast, lunch and dinner.

The Oceanico Victoria resort course at Vilamoura (or whatever they call it now) is absolutely ideal for Green. If you are looking for an actual real course correlation where the attributes needed to do well are exactly the same - then this course in Portugal and the Albatross course in the Czech Republic are those courses. A look at the vital stats over the years at both events, and also the names on the leaderboards will back this up: Random names like Tom Lewis 60/1 (6th and 3rd each of the last 2 years in Czech, and winner on this track in Portugal), and even Padraig Harrington who won here and arguably should have won in the Czech republic a few weeks back, only to be eclipsed by Pavan at the last.

The likes of Thomas Pieters plays well at both tracks and yes, obviously good players will pop up regularly on any leaderboards but there is something to this link, trust me. It comes largely in the form of driving distance. Hayden Porteous 80/1 is another 1 to watch. Already a winner at Albatross and he'll enjoy the generous landing areas this week. Hayden has been simmering nicely averaging around 25th position in his last 5 events but hasn't quite put 4 rounds together. He could here, easily. The Saffa was 5th in driving distance last year on Tour and arguably - pound for pound - given the amount of rounds played sample, only Ryan Fox was actually longer. Fox is also well worth a look here at around 40/1 ew given his prodigious length.

Gavin Green 125/1 probably doesn't even know it yet (I sent him a hint in a tweet a while back :D) but he has the game to obliterate the "Don Pedro" track if he brings his A game, or he may even contend if he has his B game. Now, golf is golf and it doesn't always work out so don't be silly re staking. I was watching GG with interest the last three weeks on (tight) courses I didn't think would suit. He actually recorded a t12 in Switzerland (and even led at 1 stage during R3 IIRC) where he ranked 2nd in greens in reg, surprisingly to me on tiny surfaces.. He MCd in Denmark before that, and at the KLM which I'm happy about as it will give him some much needed rest and also inflate his price for Portugal. He demolished the field in driving distance at Albatross where he was 10 yards ahead of 2nd place. The touch was great also as he was 2nd in PPR but this is affected by what was actually a poor GIR event stat of 66th. Green recently won a year's supply of beer too!

This is a track where - just like Doral in the US, pro players have actually come out and said the bigger hitters may aswell be playing on a different course, their advantage with the big stick is such an edge. Its only around 7,150 yards, par 71, but the par 5s and one, possibly two short par 4s can be overpowered by the bombers. The par 3s are also lengthy (3 of 4 over 200 yards) so this obviously benefits the bigger hitters too. Greens are large and undulating. It's absolutely no coincidence when you look at the records here of the likes of Nico Colsaerts 90/1 (great price) and Lucas Bjerregaard. Bjerregaard's price is absolutely terrible this week btw, don't touch it, regardless of the result. Landing areas are generous and rough is usually down on these resort layouts, and big hitting aggressive golf and par breakers pay off. Colsaerts seems to feature here every year and he's another who has been threatening to find top form and he's simmering nicely.

A caveat - esp for Gavin Green - may be the weather. IIRC Nicspicks was on both Levy and Colsaerts the year Levy won. We deffo had him, but it was a rain softened and shortened event. Last year the wind blew a hoolie I believe in the early rounds and it's quite an exposed course so this will bring the water hazards in 7 holes into play (Thomas Pieters has made friends with these hazards and probably left a club or 2 in them) and Green may not like the wind with his swing speed and power, although his course management is improving month by month. There's a lot of sand that lines the fairways but it isn't very penal and doesn't really come into play much unless very errant or windy.

Lucas Herbert 100/1 is a golfer featuring prominently on my one to watch list for years alongside Gavin Green Jacket, and he got a call up to the event in invitation form, and made a joke on Twitter: seemingly not expecting much, but maybe I'll send him a tweet too (!!!), telling the confident / borderline brash Australian bomber and par breaker machine that he may change his mind when he plays this track. We get him at a huge price relative to his fair price too, as like Porteous, he's been simmering but he's under the radar somewhat. Not mine though.

It's a pity Sean Crocker didn't win the Challenge Tour event last week, and not just for our coffers. The bomber shot -10 in round 3 to take the lead and I thought he'd run away with it tbh, but it wasn't to be. He didn't get the automatic spot in Portugal for winning there, nor an invite. Tom Lewis 60/1 though, who I mentioned is in fine form on both the tours, having blitzed an event a few weeks ago, as I said is a winner on this track and loves Albatross resort too, and low scoring events in general it seems. If you can get the 50s+, I'd have him onside for sure off the back of another near miss in Kazhakstan.

I'm going to finish the ramble just by throwing out some more big hitters at big prices here who you can choose to play in what markets you want or not: Note that I'll be playing most of the guys mentioned in this post (with odds quoted) in a variety of different markets. Any of them over ~80/1 in the first round leader market (ew) is an angle well worth taking too:

Jigger Jonathan Thompson 150/1 (on fire at the minute making more birdies than Robin Red Breast - top 25 here last year. Bomber)
Pep Angles 400/1 (drives it a mile and has been showing decent signs of late)
Jacques Kruyswijk 225/1 (may fall in love with this track- 7th in Czech a few weeks ago, high ball flight, 2nd in DD & 3rd GIR% in Czech)
Justin Walters 150/1 (has a special affinity (personal) with Vilamoura track & says he can read these greens very well, deceptively long)
Phachara Khongwatmai 100/1 just watch, wait and see - turned up here last year (T12), and also Czech this year T9 #simmering
Tapio Pulkannen 500/1 - can't leave him out on driving distance alone
Chase Koepka 250/1 - maybe the only non bomber I'm interested in this week - has been throwing in some low rounds lately. Fast starter.