Strangely enough this is an event I quite like despite the lack of any current form to go on. Not only this, the trade winds at Kapalua also make it more of a lottery but the fact is that the Plantation course is very easy to profile players for in my experience........


Basically we're looking for a big hitter with good shot making ability around the greens to give us the best chance of success here. The fairways are some of the widest you'll see while the greens are some of the largest and most undulating around. They can be tricky to hole putts on and inexperienced wind players can struggle on and around them. This course doesn't necessarily suit the guys that are all out attack. Zach Johnson has used his short game skills to excel here while Bubba Watson's record for example is not great.

So why mention Justin Thomas 28/1? Well despite me not exactly fancying his all out attacking approach and high ball flight for Kapalua, many of you will know I rate him so highly that I think he can win anywhere. But more to the point, his odds are just wrong and there is serious scope for price movement and a good trade. The winning score here is usually very low unless the wind gets seriously up and Thomas is a par breaking machine who now has that first win confidence under his belt.

Jimmy Walker was the first real pricing misjudgment of 2016 in my opinion. This is a 32 man event and the man who really should have won last year was chalked up at 55/1 in spots. The big hitter who was brought up in the Texas winds likes this place. On his debut in 2014 at Kapalua when we had him in the "to shoot lowest round" market, I remember it pretty well when he was -7 through 17 in R3 and standing on the par 5 18th tee only to duck hook it into the cabbage. I marked Jimmy an 18 or 20 to 1 shot in this field off the back of 2x 67s and a 66 last time out so at 35s he's still more than worth a bet for me.

Maybe fascinatingly it's 150/1 shot Padraig Harrington that intrigues me most this week though. Pure guesswork here really as it is everywhere but I dare say Padraig will have been practicing hard and will be more than ready to go. Harrington gets here on the back of a win at the windy Honda Classic and makes his debut despite qualifying in the past through Open Championship wins.

In a nutshell I think Harrington fits the course profile perfectly and has to be worth a speculative bet at a silly price. Kapalua eliminates Harrington's weaknesses (driving accuracy) and brings out his strengths (wind play and shot making around the greens) in my opinion so it will be interesting to see how the Irishman gets on.

Quite simply the last 2 editions of the SA Open at Glendower were a case of chalk and cheese. Fairways are very narrow here but 2 years ago the rough was down and in the words of Charl Schwartzel: "the rough was down and it was a bit of a free-for-all". Before last year's event he was much more exited claiming with the rough up, it gives the guys playing well a better chance. Schwartzel talked about how if you missed a fairway you may need to chop out and if you missed a green, getting close to the pin with the chip was going to be extremely tough.

The scoring in both years reflected the conditions with the wild Morten Orum Madsen winning on -19 in 2013/14, while only 3 players hit double digits in last year's renewal. To demonstrate the tightness of the fairways, the top 10 last year still only averaged about 50% of fairways hit.

Below is a picture providing a good guide to the fibre at Glendower this year. The course comes in at a lengthy 7,550 yards approximately but the track in Joburg is at altitude so it doesn't play long at all. Drivers can be kept in the bag a lot. By all accounts from Twitter the course is in pure and pristine condition. 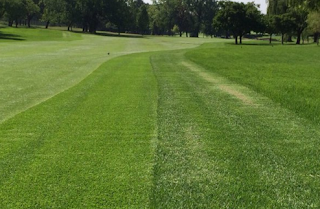 I do like Lee Slattery and Gregory Bourdy here, especially for early rounds trading purposes, aswell as Hennie Otto who has a decent record here and whose hit and miss style allows for big odds fluctuations. Slattery and Bourdy's prices (averaging 30s now after the social mediasphere and Twitter train have done their damage) are not too appealing anymore though.

First up is Glendower member Ulrich Van Den Berg whose 125/150 to 1 odds baffle me following a hugely impressive 3 way tie for the win at European Tour Q-School at the back end of 2015 on a couple of treelined tracks at PGA Catalunya resort where driving accuracy is at a premium. Van Den Berg was T22 in season 2013/14 here and also has good numbers in the BMG Classic on the Sunshine Tour down the years at Glendower including a win in '13 ahead of aforementioned Hennie Otto.

Matt Ford 100/1 is another I feel is big at a three figure quote. Ford finished the calendar year 2015 with back to back top 10s in Hong Kong and an impressive T5 at Leopard Creek - again two treelined tracks. Ford also has previous in South Africa having finished runner up on another tight course at East London for the Africa Open around this time last year. He excels with the putter for what are pure greens and ranked 40th in driving accuracy in 2015.