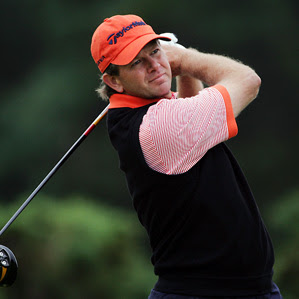 Go Low In ShangHIGH The HSBC Championships is the next stop on tour for the world's top golf pros as the massive Race to Dubai draws to a close and the HSBC field in Shanghai is dominated by the very best, with Tiger Woods heading the

betting once more. PaddyPower and Sky Bet are offering the "To shoot lowest round" market again and many Nic's Picks visitors will remember the profits last time that was on offer! Retief Goosen has a top record at the HSBC Championships and will feature in the picks. Geoff Ogilvy knows how to go low on fast top quality greens and Robert Allenby is in fine form as the elite get ready to do battle at the HSBC, 1 of the final golfing events of the season..... Click link for expert value betting picks for the HSBC Championships

The Sentosa course in shanghai plays 7,199 yards long with water hazards and trees lining the fairways and greens. The rough this year has been overseeded with rye making it even more important to hit the fairways from the tee. The greens have some false fronts making accurate iron play and distance control very important this week. According to Vijay Singh (who recently gave Robert Allenby a putting lesson) these greens are the best he's ever played. It will be a pretty tough test for the world's best this week in Shanghai.

FREE expert HSBC Championships Value picks:
-1pt E/W Ross Fisher @ 33/1 (Bet365) I wouldn't usually back a guy coming off a win but Fisher now has the goal of WINNING the race to Dubai so his concentration will be still there as well as the fact that he only lost here in a playoff in 2007 and obviously has current form off the back of his win last week.

-1pt E/W Robert Allenby (W/O Woods market)@ 35/1 ( StanJames) Allenby finished off last Sunday shooting -10 through 19 holes which included 2 eagles and being long and straight off the tee and with his putting improving with his new style, expect him to be up there again this week

-1pt E/W Geoff Ogilvy @ 40/1 (PaddyPower) delivered for us last time in this market and on these greens, if the driver works on any given day, a low number is again within his reach. Top 5 here last year.

-0.75pts E/W Jeev Milkha Singh @ 60/1 (PaddyPower) Has fired a few very low rounds of late, most recently last week when he thrashed Lee Westwood of all people in the Volvo matchplay and he loves playing golf in this part of the world

-0.5pts E/W Thomas Aiken @ 125/1 (PaddyPower) Capable of going extremely low on any given day but seems unable to put 4 rounds together on the major tours. Shot a -8 earlier in the year on day 1 with greens not to0 dissimilar to the greens at Seshan