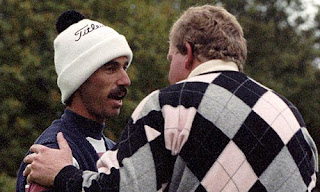 Sadly not I fear. The 2 Ryder cup captains renew acquaintances this week at the future scene of the next ryder cup but sadly the chances of either landing a victory are slim. But saying that, after Cevear's victory last week, golf is a funny game.In actual fact, there are no real stand out picks this week. None that represent real value that is. Jeev Milka Singh was in @ 30's on Stanjames on monday which would have been nice but it was cut to 22's soon after. Stephen Dodd was on the radar but unfortunately he finished too well last week which priced him up too short for this week. Oosthuizen's price was decent but his low driving accuracy% may be a disadvgantage on this course.

Accuracy and length are both important this week. It's a long track at almost 7,500yards and most fairways have strategically places bunkers and doglegs. It's also an exposed course akin to that of last week and these factors all together lead me to my first pick :