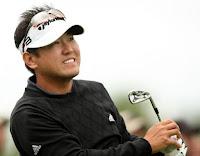 Charlie Wi has been a nearly man on the PGA Tour and has shown on numerous occasions he can stay the pace with the elite and on tough tracks, not least at the USPGA major last year, and with the TPC four seasons at Las Colinas being ranked 7/54 in difficulty last season (he had a top 10 finish here last year too) he may be good value to go well again.

-0.5pts EW Charlie Wi @ 50/1 (general) Ranked 8th in putting average and has the ball striking to contend with high winds which are likely to be a factor

-1pt E/W Justin Leonard @ 25/1 (general) Grew up around here and none better at playing in this type of wind. Great course form, should really be favourite after good outing last week.